The West Wales Centre is a friendly, family based club and is part of the Caravan and Motorhome Club.

We hold caravan rallies mainly in our area of West Wales and sometimes further afield. Our rally programme has something for everyone, from quiet weekends in idyllic surroundings to busy events rallies such as the Summer Tea, Harvest Supper, Halloween and New Year.

We also hold events off the field such as our legendary Dinner and Dance, Rally-goers Social, Teen trip, Children’s pantomime and Children’s Christmas party.

If you are a member of the Caravan and Motorhome Club but have never rallied or are with another centre and would like to join us for a weekend, we would love to see you. 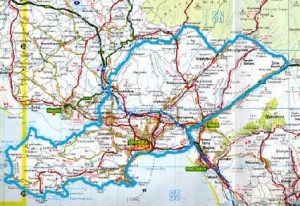 The West Wales Centre was formed at a meeting that took place at The Dolphin Hotel Swansea on 13 Nov 1965 chaired by the Vice Chair of the Caravan Club.

The meeting was attended by Mr Frank Loring who was the South Wales Centre chairman who wished the new centre best wishes for the future. The new centre was officially started on January 1st 1966

The first committee meeting took place at the Ivy Bush Hotel, Carmarthen on December 7th 1965 at which it was agreed that the 1st West Wales rally would take place at Derwydd farm,  Carmarthen on the 5th May 1966 at a cost of 5 shillings for the weekend!! The first West Wales Dinner and Dance was also agreed at this meeting and that it would take place at the Ivy Bush at a cost of 30 shillings!! For this members had entertainment from with a three piece band  (at the huge expense of £20) and a harpist was booked to play during the meal.

Prior to the West Wales Centre being formed, there had been 2 Welsh Centres (North & South Wales with the divide roughly half way up the country)

The 1st West Wales AGM was at the Dolphin Hotel on Sunday September 25th at 2.30pm, all officers returned unopposed. There were 124 members listed at the first AGM which then rose to over 400 by the end of the season. 23 rallies were proposed for the coming season 1966/67. The inaugural West Wales Dinner and Dance was attended by the Vice-Chairman of the Caravan Club, the Mayor of Carmarthen and the Chief Constable of Carmarthenshire.

The Centre still visits many of the original venues and continues to hold annual Dinner and Dances (although the cost has increased from the initial 30 shillings!).